There are many temples in and round the city of Udaipur. Read more about the temple of Udaipur, Rajasthan.
Udaipur: Udaipur Temples 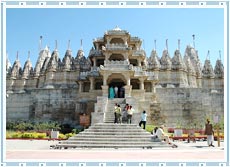 Udaipur is famous for its lofty lakes, huge palaces, massive forts and artistic temples. The word 'Temple' itself brings a sense of reverence in the mind. A tour doesn't only mean roaming round the substantial worldly structures, but something that has a spiritual appeal too. The temples in and around Udaipur are famous for their striking architecture and religious nature. The temples foreshadow the cultural aspect of Udaipur. There are numerous temples in and around Udaipur that are famous for their architecture and sacredness. The noble kings of Udaipur had always been great advocates of religion.

It shows that the foundation of this beautiful city is blessed by these temples. The temples also depict the spiritual and aesthetic nature of the city dwellers of Udaipur. Many of these temples are acknowledged as the holy pilgrimages of the Hindus. In Udaipur, Jagdish Temple is the well-known temple dedicated to Lord Vishnu. Around Udaipur, you can visit Eklingji Temple, Rishabdeo Temple, Ranakpur Temples, Nathdwara Temple, Jagat Temple and Kankroli Temple. All these temples are dedicated to several forms of God. The following links will give you a comprehensive view about all these temples of Udaipur.

Jagdish Temple
Jagdish Temple is one of the famous temples of Udaipur. Located in the City Palace complex of Udaipur, this temple is made in the Indo-Aryan style of architecture. In 1651, Jagdish temple was built by Maharana Jagat Singh, who ruled Udaipur during 1628-53.

Ranakpur Temple
Ranakpur Temples are acclaimed world-wide for their intricate and superb architectural style. These temples form one of the five major pilgrimages of the Jains. Located in village of Ranakpur near Sadri town in the Pali district of Rajasthan,

Rishabhdeo Temple
Rishabhdeo Temple is an important pilgrimage site for followers of Jain religion. The temple is located on Udaipur-Ahmedabad road, at a distance of 65 kms from the city of Udaipur in Dhulev. Dhulev is a small town that is also known as Rikhabdeo,

Jagat Temple
Ambika Mata Temple is a small shrine made in crevice of a rock. The temple dedicated to Goddess Ambika (a form of Goddess Durga). Being located at the village called Jagat in Rajasthan, the temple is also known as Jagat Temple. The shrine is comfortably positioned at a distance of 58kms in the south-east of Udaipur.

Kankroli Temple
Kankroli is a small town, located at a distance of 65 kms from the city of Udaipur. Kankroli is mainly known for its temple, which is sited on the banks of renowned Rajsamand Lake. Kankroli Temple is popularly called as temple of Dwarikadhish. Dwarikadhish is one of the names of Lord Krishna.

Nathdwara Temple
Nathdwara is a small town in the Indian state of Rajasthan. Situated at a distance of 48kms in the north-east of Udaipur, Nathdwara is sited on the right bank of Banas River. Nathdwara is famous for its 17th century temple that is dedicated to Lord Shrinathji (Lord Krishna).