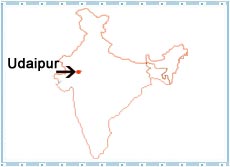 In the language of geography, Udaipur runs from latitude 24.58 degrees in the north to longitude 73.68 degrees in the east. The city covers an area of 37 sq kms and lies at an altitude of 598 m above sea level. Mentioning about the geographical location of Udaipur, India, the city is sited in the southwest of Jaipur, near the border of Gujarat. Being situated in a desert area along with lakes, Udaipur usually remains sultry.