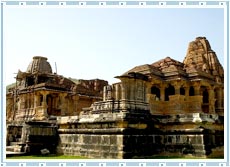 Eklingji Temple is one of the most famous temples of Rajasthan. Located in the town of Eklingji (Kailashpuri), the place got its popular name from the temple. Eklingji Temple is positioned at a distance of 22 km in the north of Udaipur, on the national highway no. 8. Eklingnath Temple is dedicated to the Lord Shiva of the Hindu religion. Initially, the temple was built in 734 A.D. by Bappa Rawal. Since that time, Eklingji has been the ruling deity of Mewar rulers. In the later years, it was repaired and modified by various Kings, to clean the remnants of obliteration made by the attacks of Mohammedans.

The magnificent architecture of Eklingnath Temple is simply remarkable. The double-storied temple looks awesome with its pyramidal style of roof and distinctly carved tower. The outer walls of the temple are stretched with steps that descend touching the serene waters. Inside the complex, the main temple is a huge pillared hall or 'mandap' that is sheltered by hefty pyramidal roof. On entering this hall, you will be welcomed by a silver image of Nandi. In the temple, there are two other images of Nandi carved in black stone and brass respectively. You would find this temple full of mesmerizing fragrance.

Being sited in the middle, Shivlinga is encircled by Goddess Parvati, Lord Ganesha and Lord Kartikay. Inside the temple complex, you would find statues of Goddess Saraswati and Goddess Yamuna. The main temple also boasts of heavy silver doors, which depicts Lord Ganesha and Lord Kartikay guarding their father. To the north of Eklingji temple, there are two tanks namely Karz Kund and Tulsi Kund. Water of these tanks is consumed during the services of the Lord. The festival of Shivratri is observed here with full gusto and fervor. At this time, the image of Lord Shiva is adorned with jewelry.

Enrooted in the religious roots, the town comprises around 108 small and big temples. Near to Eklingji Temple, you can also trace various temples that are dedicated to Ambika Mata, Kalki and Lord Ganesha. One more temple by the name of Nathon Ka Mandir that dates back to 10th century catches the attraction. Lakulish temple is a fine temple that was built in 971. It is the exclusive temple of the Lakulish sect in India. Sas- Bahu temple is another temple that is all raised in marble of the 11th century. The Jain Temple of Adbhudji is made in black marble which dates back to the 15th century.

Amongst other temples of Kailashpuri (better known as Eklingji), temples of Pataleshwar Mahadeo, Arbada Mata, Rathasan Devi and Vindhyavasini Devi are worth mentioning. The wonderful architecture of these temples makes the onlooker to ponder over the artistry of those times. The city of Eklingji or Kailashpuri is located amidst a beautiful valley on the lands of Rajasthan that houses some of the marvelous temples of India. While planning your trip to Udaipur, don't forget to include Eklingji in your itinerary, otherwise you would be at a miss.