Pichola Lake is the most picturesque lake of Udaipur, Rajasthan. Read about the beautiful lake Pichhola.
Udaipur : Lakes : Pichola Lake 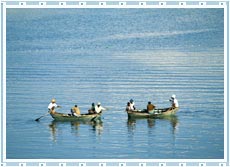 Pichola Lake is one of the most beautiful and picturesque lakes of Rajasthan, India. Located in the heart of the city, Pichola Lake is the oldest and one of the largest lakes of Udaipur. In 1362, the beautiful lake was built by Pichhu Banjara during the ruling period of Maharana Lakha. Talking about the dimensions of Pichhola Lake, it is extended to 3 miles in length, 2 miles in width and has depth of 30 feet.

The beauty of this lake has not separated anyone to attract towards it. The lake looks more enchanting with its scenic surroundings. Maharana Udai Singh must have been certainly captivated by the charm of this pristine lake with the perfect backdrop of lush green hills as when he founded the city of Udaipur, he enlarged this lake. He also constructed a dam made in stone that falls under the 'Badipol' region on the shore of this lake.

Pichola Lake is enveloped by lofty Palaces, temples, bathing ghats and elevated hills on all its sides. In the southern part of this lake, there is a hill that is known as Machhala Magra and one can see glimpse of Eklinggarh Fort from here. The City Palace of Udaipur broadens along the eastern banks of this lake. Built by Jagat Singh, Mohan Mandir is situated in the north-east corner of Lake Pichola.

Lake Pichola comprises several islands that accompany the calm waters of the lake. The world-renowned Lake Palace is perfectly located on the Jag Island of this tranquil lake. Even the Jag Mandir, another destination of tourists, is located on an island of this lake. Above all, a trip to Pichola Lake would be incomplete with a boat ride. The pristine blue waters of the lake leave a soothing impact on the spectator. At the time sun-set, a boat ride in this lake is sufficient to enthrall anyone.

Rudyard Kipling mentioned this lake in his Letters of Marque (1899), "If the Venetian owned the Pichola Lake, he might say with justice, `see it and die'". The beauty of Lake Pichola attracts people from all over the world. One can undeniably say for Pichola that once, if you see this lake, you would definitely fall in love with it. The mesmerizing beauty of Lake Pichola makes it worth visiting during your visit to Udaipur.