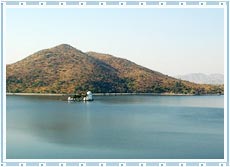 Lakes make a perfect backdrop to the romantic setting of Udaipur. Udaipur is truly famous for its beautiful lakes and watercourses. The city is popular by the phrase of 'the city of lakes'. Water is a basic necessity of life and lakes full of water give a sense of relief. The Picturesque lakes offering fabulous view of the mountains make Udaipur, a dream destination of every tourist. Since ages, these lakes have been providing water to the city dwellers.

In the evening, boat-ride in these watercourses leaves a soothing impact on the tangled nerves of the people. Lake Pichola, Udai Sagar Lake, Fateh Sagar Lake, Rajsamand Lake and Jaisamand Lake are the five prominent lakes of Udaipur. Apart from these lakes, Doodh Talai, Badi Ka Talab and Kumharia Talab are other small lakes that form the part of watercourses in Udaipur. In this section, we will discuss in detail about the lakes of Udaipur.

Pichola Lake
Pichola Lake is one of the most beautiful and picturesque lakes of Rajasthan, India. Located in the heart of the city, Pichola Lake is the oldest and one of the largest lakes of Udaipur. In 1362, the beautiful lake was built by Pichhu Banjara during the ruling period of Maharana Lakha.

Jaisamand Lake
Jaisamand Lake is renowned for being the second largest artificial lake in Asia. Located at a distance of 48 kms from the city of Udaipur, Jaisamand Lake is also known as Dhebar. In 1685, Maharana Jai Singh built this lake while making a dam on the Gomti River.

Udai Sagar Lake
Udai Sagar Lake is another striking lake that falls under the category of five lakes of Udaipur. Udaisagar Lake is located at a distance of about 13 kms in the east of Udaipur. The construction of this lake was started in 1559 by Maharana Udai Singh and got completed in 1565.

Dudh/ Doodh Talai
Doodh Talai is a small lake that adores the south-east direction of Pichola Lake. Located in the southern side of Shiv Niwas Palace, Dudh Talai contributes to the waters of Lake Pichola. This stream adds to the picturesque triangle in the company of Pichola on one side, Doodh Talai on the second and M.L. Verma Garden on the third.

Jiyan Sagar (Badi Ka Talab)
Jiyan Sagar is another striking lake, located in the village of Badi. Built by Maharana Raj Singh, Jiyan Sagar was built to deal with the problem of famine in the area. The lake was named after Jana Devi, mother of Raj Singh. Jiyan Sagar is also known as Badi Ka Talab. It sprawls in an area of 155 sq. km. and the embankment of the lake extends to the length of 180 meters and width of 18 meters. Jiyan Sagar also adores three artistic kiosks (chattris).